The Catholic Church is the largest non-governmental landholder in the world. Molly is on a mission to map these lands so the Church can better use these lands to care for creation and help save the planet.

This year, the United Nations named Molly a Young Champion of the Earth.

“If we’re going to address climate change sufficiently, then the Catholic Church is going to play a very significant role in that,” she shares.

I’m the founder and executive director of GoodLands. We’re helping mostly Catholic communities manage their property for environmental impact and for their own financial management.

Molly makes maps and data systems for the Catholic Church.

Okay, do you want to see something really cool? Check this out. This is biodiversity per diocese. So you can see the red ones are the most biodiverse with the most endangered species. The Catholic Church, as very likely the largest nongovernmental landholder in the world, really has a duty to use her lands.

Molly is trying to chart all Catholic-owned lands. It’s never been done.

Okay, so this map shows the hierarchical organization of the Church around the world. Those take an enormous amount of work. If you look at this map, anyone that lives in a diocese that’s orange or red is facing a lot of challenges with a loss of growing days of a minimum of 20 per year, which can be completely disruptive to crop cycles. That’s going to really drive migration, lack of food security, lack of viable land for farming, shifts in local climate. By 2020, if we do not cut emissions, we can see about 209 days that experience an amount of heat that is damaging to human health.

It’s interesting, yeah. I feel like the work I’m doing has to happen. It’s kind of inevitable, if we’re going to address climate change sufficiently, that the Catholic Church is going to play a very significant role in that. Yeah, I guess that really helps decrease the intimidation, because it just has to happen. I started it because I felt somebody else would be doing it, and I said, “Why not?”

We’re told to have courage, and having courage doesn’t mean you’re not afraid. I’ve pored through the data, and there’s a lot of scary stuff out there. But, I’m still overwhelmed with hope. We will make it out the other side of this global crisis with a more loving and compassionate world.

One of the most exciting days so far on this journey has been during a papal audience when I had a chance to give Pope Francis a map of Catholics per diocese by percentage. It was the first time the pope ever saw a visualization of the flock that he herds all over the world. He’s got the hardest job in the world, I think.

Just trying to even capture this glorious creation of God is something we could do for a lifetime, many lifetimes, you know? It’s just, we’re given this opportunity to steward the earth, to tend for the garden, and it’s a magnificent opportunity.

With mapping and planning, you just want to express that beauty through the truths of science. And, it always falls a little bit short, and that’s where I feel like art can come in. 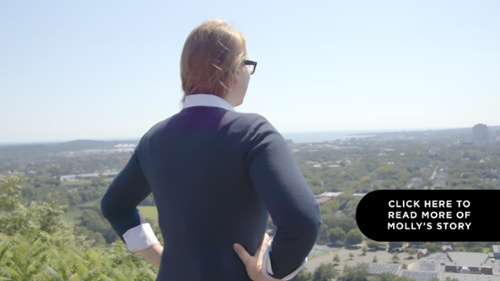 Meet the Woman Helping the Catholic Church Care for Creation

4 Steps to Lead Your Employer to a Greener Footprint

What You Need to Know About the World Water Crisis