In my high school history classroom, one wall was adorned with striking yet peculiar wooden plaques. During Mr. Medeiros’s lectures, my eyes inevitably would wander to this wall. As a longtime Catholic school student and parish altar server, I was no stranger to religious art, but these were so different from anything I had experienced beforehand. What was the story behind this entire wall of similarly-sized wooden pieces? And, why were all the figures depicted in the same style with elongated facial features and spindly fingers? And, really, was it a requirement that they look so morose?!

In college, I finally learned what to call these pieces of art: icons. Iconography — the practice of writing (yes, “writing,” rather than “painting”) icons — is most strongly associated with Christianity in the East. Still, iconography has been a central style of Christian sacred art since the earliest Christian communities. Recently, there has been a resurgence of the use of icons among Western Christians for personal and communal prayer.

As contemporary iconographers are breathing new life into this ancient tradition, I think back to my high school-self who was confused, intrigued, and somewhat-intimidated by Mr. Medeiros’s wall of unfamiliar art. I wish I had known then what I know now: icons are nothing to be intimidated by! Rather, they are invitations to encounter the divine in a real way.

So, what makes an icon?

Although an icon can be classified as religious art, it is more than that, too. At its core, an icon is a window to heaven. Rather than the iconographer visually representing a particular saint by means of paint or pencil, the iconographer is bringing to life an image of the saint as he or she is in heaven. The icon — often written with egg tempera or acrylic paints on a hard, resilient surface such as wood or ivory — is understood as a means to access the sacred figure, whether it be a saint or Jesus or Jesus’ mother, Mary. A wall adorned with icons can be likened to a wall with little windows giving us direct access to a multitude of different saints as they are in heaven, whom we can encounter in a very real and eternal way.

Are icons like the magical portraits hanging in Hogwarts? Of course not — they are works of art. But they are also more than that — they are a medium for prayer. When we engage them prayerfully, they put us in touch with heaven.

Furthermore, just as a window can be peered through from the inside and the outside, the tradition of iconography holds that the icon is a two-way window. We not only see the figure in the icon, but when we prayerfully gaze on the image, we can contemplate being seen by the figure with a heavenly gaze of love. Rather than a two-dimensional work of art that we passively take in, icons invite us to cross the threshold between this world and the next as we are swept into an embrace with the divine.

The process of writing an icon is an intricate and sacred process. The iconographer engages in prayer, reflection, and fasting before writing an icon because the image they create is an extension of their spiritual life.

Although there is increased variation in iconography today, there are many enduring characteristics of this ancient and sacred tradition that we see in contemporary icons. For instance, the paint is often translucent to allow light to pass through and reflect the various layers of color, especially when the icon has a gold-leaf background.

In addition, someone new to icons will notice immediately that the figures and scenes appear unrealistic and unnatural. These stylized alterations are purposeful because the image is not a depiction of something that is familiar to us here on earth; we are gazing into heaven! Another noticeable element is the triangular layout that many icons feature. This reminds us of the Trinity and, again, compels us to lift our eyes, hearts, and minds upwards.

Getting started with icons in prayer

Remember, icons are meant to invite an encounter with the sacred, not to scare or confound. If you are open to a new form of prayer, and process things visually, they can be a powerful focal point for contemplation and reflection. If you’re a little skeptical or just not sure how to begin incorporating icons into your prayer life, here’s how to start. 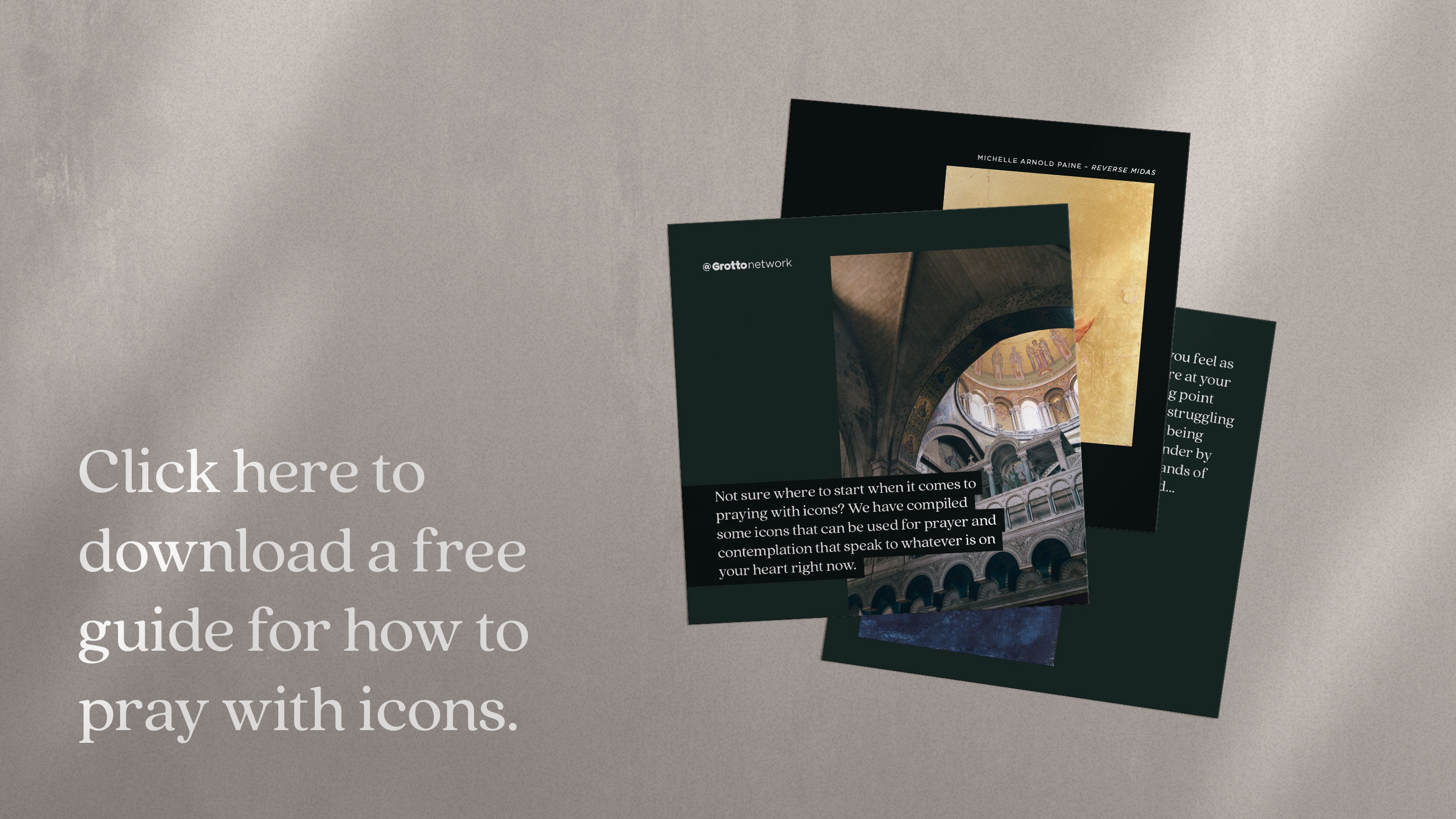 First, choose an icon. No need to overthink it. Consider what is on your heart these days or think about a religious figure to whom you are drawn.

Then, before even trying to pray with your icon, simply grow comfortable with it. Familiarize yourself with the elements of the image in the icon, just as you would a new acquaintance in your life. And (though this may seem strange) let the icon grow familiar with you, too. If you have a wooden icon, place it in a well-trod spot in your home and try acknowledging it when you pass. Or, save a digital image of your icon and set it as your phone background. You could print the image out and tape it to the corner of your mirror. Get to know your icon — and let your icon see you in your daily life.

When you are feeling at ease with your icon, you are ready to pray with it! Find a quiet, peaceful place and a block of uninterrupted time. Ask the Holy Spirit to be with you as you contemplate the icon. Maybe start by noticing the small details and symbols that you have overlooked. Is there something in the icon that strikes you as especially unnatural? How does this invite you to think about that which is eternal? Or, consider what the icon is seeing in you as you sit before it in prayer.

Iconography is a treasured art form that offers something distinct from other religious art: a real encounter with that which is sacred. Giving this ancient prayer form a try can open our hearts as we peer through these windows to heaven.

Loving contemplation, typical of the most intimate #prayer, does not need many words. A gaze is enough. It is enough to be convinced that our life is surrounded by an immense and faithful love that nothing can ever separate us from. #GeneralAudience

An Inside Look at the Ancient Art of Iconography

What’s the Point of Abstract Art? Maybe It’s How it Works on our Hearts

5 Ways We Can Find Proof of God’s Existence